The global outsourcing market is strong, $85.6 billion in 2018, with larger companies such as Apple, IBM and Cisco Systems outsourcing, most commonly, more technical tasks like accounting, IT services, and digital marketing responsibilities.

As a result of outsourcing, those larger companies also gain the following benefits:

If the brand your promoting is earlier in it's lifecycle but has similar needs (you would like to receive similar results) you may want to consider outsourcing -- model some these larger companies...Just follow the same line of thought and behaviors, adapt them to your specific situation, execute your plan, and you'll arrive to where they are.

Now, let’s look at some companies you probably didn’t know outsource staffing and how they do it.

Before being acquired by Facebook, WhatsApp’s offices in Mountain View, California housed just 30 employees, most in charge of customer service, as its technical and development teams were in Russia. In fact, initial development was outsourced to a Russian independent contractor, Igor Solomennikov, who later became a full-time employee.

Here’s another multi-billion-dollar company who began outsourcing its software development. The founders hired a design agency to polish their early prototype, design their logo, website and the web and mobile apps.

AMEX has been outsourcing for decades. For instance, they outsource customer support to companies in India and the Philippines.

This software company founded in 2008 develops an expense management system for personal and business use. They began outsourcing the development of their back-end system a few years ago. Currently, they outsource sales.

The software giant is believed to have as many outsourced staff as they have in-house employees. The outsourced contractors usually focus on tasks outside of the scope and expertise of employees. In other words, if an in-house employee can do a particular job, no outside worker will be hired in place of them.

It's well-known that the iPhone is designed in California but manufactured in China, as news of giant Chinese plants have been all over our TV screens. More than 95% of Apple products (by value) are assembled in China. One analysis states that if Apple were forced to manufacture in America, the iPhone would cost over $30,000 per unit.

With thousands of manufacturing plants in China, Wal-Mart makes most of its products there to keep offering low prices. Wal-Mart has also recently decided to outsource its finance and accounting services to a New York-based company.

From its inception, Nike has manufactured its sportswear overseas. Beginning in Japan during the first few years, then Taiwan, China and some manufacturing plants in India, South Korea, Thailand, and Vietnam.

One of the secrets to Cisco’s growth was hiring engineering talent in India to become a competitive global brand. The company has a vast majority of its operations outside of the United States, especially in China and India.

Is Outsourcing Staffing a Good Business Strategy for You?

There are many factors to consider when deciding to outsource staffing. You might think the most common reasons to outsource are to increase efficiency, save costs, and receive expert support. However, research from IBM revealed that only 27% of companies outsource to cut costs, whereas 36% are innovators and 37% are growth-seekers.

This means successful companies are using outsourcing as one of their tools to optimize their businesses.

The key to using outsourcing as a tool to improve your business is to make your outsourcing strategy part of your overall business plan for one or more of the following reasons:


As the outsourcing industry continues to explode worldwide, outsourcing standards and norms have gain strength thanks to Intellectual Property laws and other regulations that make dealing with the outsourcing process a lot easier.

Additionally, outsourcing provides a combination of operational advantages that will help your company leverage specific skill sets outside your current talent pool, as well as innovation and data insights that will most definitely benefit your business.

5 Misconceptions About Outsourcing Sales vs the Reality 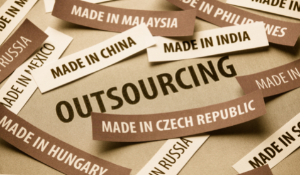 How to Use Outsourcing to Grow Your Business